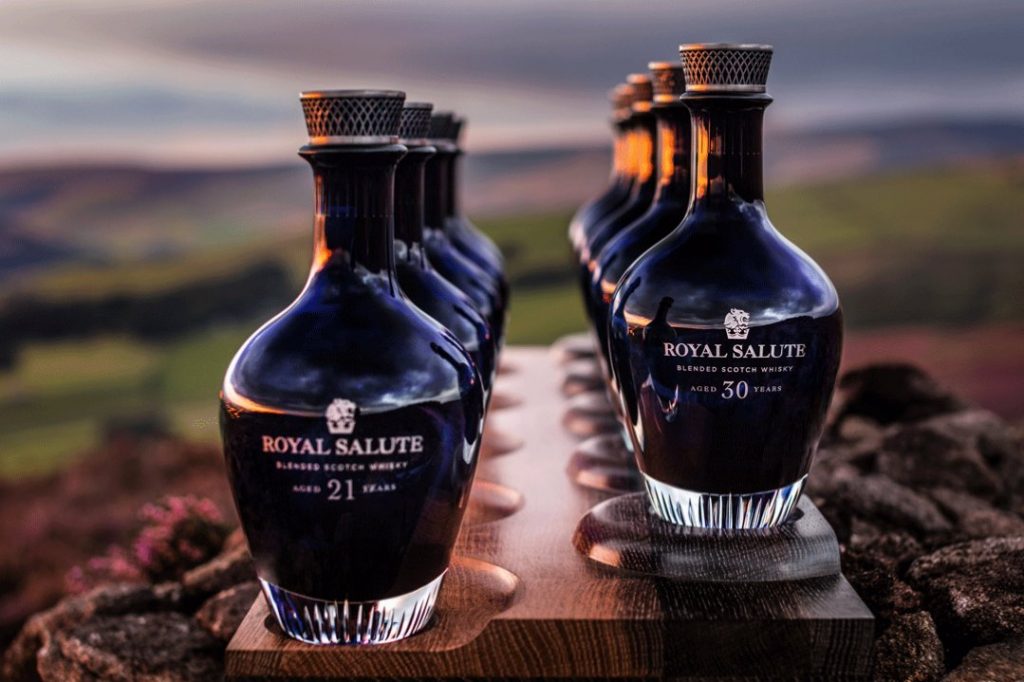 Made for royalty and fit for royalty, the Royal Salute Scotch Whisky Collection caters to whiskey aficionados of distinguished taste by selecting and blending some of the rarest scotches in the world. Established in 1953 by highly-regarded entrepreneur Sam Bronfman, his original blend – the 21 Gun Salute — was conceived to celebrate the coronation of Queen Elizabeth II and Bronfman’s personal devotion to the British Royal Family. The name originates from the traditional sign of respect that takes place at the Tower of London for special royal occasions. This original scotch blend was quite literally made to celebrate the Royals and only includes top quality products.

The company continues to make luxury whisky honoring British history while using some of the finest ingredients and the best single malt scotch whisky available. Their current range of whiskies features blends of scotch aged for no less than twenty-one years, and the company continues to press deeper into the art of creative blending. The Malts Blend comes from a combination of over twenty single malt scotch whiskies derived from all five regions of Scotland. This particular concoction emanates a final touch of spice behind sweet, creaminess, but the nose bursts with orchard fruit. Only the best single malt scotch whisky may be used, rendering its flavor intricacies astonishing.

Honoring the Union of the Crown, the Royal Salute 32 Year Old is the product of handpicked single malt and grain whiskies with a minimum aging of thirty-two years. Celebrating the unification under a single British monarchy, the contributions to this scotch make it strikingly smooth, reminiscent of orange, ripe pears, and ginger cake. A distinctive step above, the Royal Salute 38 Year Old offers access to the distillery’s special vault, and is named for the Stone of Destiny, a legendary Coronation stone used among the ancient Scottish Kings. Only including whiskies aged at least thirty-eight years, its taste is decidedly spicy and floral, lingering in the mouth.

The 62 Gun Salute is their final major product and gives tribute to the highest ceremonial honor in British traditions. This meticulously selected blend of rare whiskies creates a polished weaving of daring complexity. A hint of smoke wafts over the long finish, and intense orange notes dance with a profound flavor of nut and oak. The nose remains warm with dark chocolate, cinnamon, and full, ripe plums.

Currently, Sandy Hyslop, the Director of Blending at Chivas Brothers, curates the flavor of the brand at its home in Strathisla Distillery. The goal is always a round taste evoking high class extravagance. Not an everyday scotch, the products by the Royal Salute impressively blend rare spirits to revere royal fame with luxury whisky. The goal is to capture that moment of history, pride, and richness in each taste. These extraordinary spirits are meant to be savored and celebrated with gusto. After all, this prestige scotch whisky brand has developed some of the world’s finest spirits.